NOTICE is hereby given that the

Will be held in the rear hall of the

At 8.00 p.m. or as soon thereafter as the Annual Parish Council Meeting ends

Clerk of the Council

Annual Meeting of the Parish Council 19th May 2021

NOTICE is hereby given that the ANNUAL

MEETING of the PARISH COUNCIL

Will be held in the rear hall of the

Clerk of the Council

THE ANNUAL PARISH MEETING WILL FOLLOW IMMEDIATELY (not before 8.00.pm.) and will have a Public Discussion period. 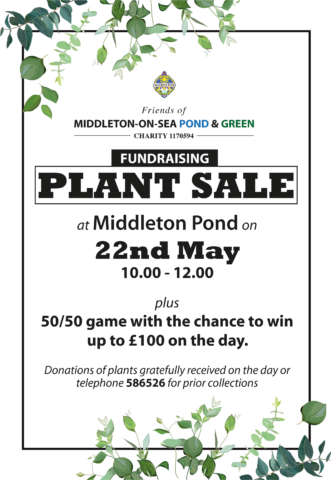 The objective of the scheme is to provide fair access to as many residents as possible in any given week, in a way that’s safe for staff and visitors, and avoids disruption to local residents, businesses and the highway network.

Residents can book a slot up to 14 days in advance and must book at least one day before you intend to visit the site.

To give feedback on the trial, please email: [email protected]

More information about the scheme and to book a visit.

HEIGHTS ARE ABOVE CHART DATUM

A meeting on the 4th February 2021 of the Project Liaison Group representatives which Middleton-on-Sea Parish Council are represented on took place to discuss the latest updates with regard to the Rampion 2 project.

Below are two links, one with regard to the minutes of the meeting with a Q&A session and the second is a slide presentation from Rampion.

We are all aware of the existing Rampion wind farm. Tackling climate change is a national and global priority but, like any other aspect of the built environment, a wind farm needs to be sensitively and rationally planned to minimize harm.

A new wind farm, Rampion 2, is being proposed that does not minimize harm at all. Rather than an ‘extension’, it is a wholly different enterprise to Rampion 1 in many respects, requiring a new cable link to the National Grid, running from Clymping beach to a new 11-acre substation in Bolney – continuing the disturbance already caused there. What is being proposed risks bringing deleterious changes to the social, economic and natural environment of West Sussex.

The developers suggest that the new proposal means that the existing Rampion will ‘double in size’. On BBC South Today (on 14th January 2021), they justified this by saying the new wind farm would have the same number of turbines as Rampion 1. The proposal is indeed for up to 116 turbines, the same number as in Rampion 1.

However, the new turbines will be very much larger and more powerful, so they will have to be spread out very much more. Taken together with the existing wind farm, the total power would be four times the size (going from 400MW to 1600MW) and potentially spread out to cover up to five times the area, fencing in the Sussex Bay from Newhaven to Selsey Bill. To talk of merely ‘double in size’ is misleading.

In public presentations, the developers have often left the impression that the new turbines would be only 50% taller. However, the turbines could be significantly larger at 2.35 times the height – each one taller than the Eiffel Tower. And, given their positioning across a southern bay, with the sun behind them, and given that the blades of each turbine will cover nearly 4 times the swept area of an existing Rampion turbine, they will be very visible pretty much all the time. They would dominate the daytime horizon as dark and huge industrial towers – with flashing red lights at night.

Some of this height and size data is buried on page 399 of Rampion’s 970-page Scoping Report published on the government planning website – and is discreetly referred to on one of the banners in their virtual exhibition.

When viewed from various locations along the coast, the new turbines would appear even taller still. The graphic above shows how from Middleton on Sea, for example, they would appear around 4 times taller than those of the existing Rampion (assuming the observer is 5m above sea level, standing on the edge of the greensward; the Earth curvature has been accounted for).

The proposed Rampion 2 is also an inshore – not offshore – wind farm. Five years ago, wind farms in the UK were on average 17 ½ miles offshore . By 2019, the average for EU wind farms had increased to 37 miles . The Prime Minister has announced a new target of 40GW of wind power by 2030 (increased from 30GW), with wind farms sited ‘far out in the deepest waters’ (6/10/20).

Government Guidelines (OESEA2 ) recommend all new wind farms should be in offshore waters (i.e. more than 14 miles from the shore), and that for the larger turbines proposed they should be at least 25 miles offshore (OESEA3) for low visible impact.

Rampion 2 completely ignores all this. It would be sited almost wholly within INSHORE waters, only 8 miles from shore.

NOWHERE on the UK Coast are there such large turbines so close to the shore (in operation, under construction, or with a planning application filed)

If the proposed Rampion 2 inshore project goes ahead, the impact spreads wide. Only last year, David Attenborough explicitly expressed concern that ‘dredging to install cable to offshore wind farms changes the seabed and its wildlife forever’ . This forbidding fence of massive turbines is also likely to cause the coastal economy in West Sussex to go further into decline. Those who come here for the sea views and invest in the area will increasingly shun this part of the Sussex bay – choosing to go to more attractive locations instead. Unless the wind farm were moved more than 13 miles further offshore, it would have a significant impact on key viewpoints in the South Downs National Park. When the SDNP was designated, great weight was given by the Planning Inspector to the quality of the seascape and the extensive and uninterrupted views from the South Downs out to sea.

The Rampion 2 developers are not considering going further offshore, however, and claim they cannot do this due to shipping only a few miles further out. This is effectively an admission that the West Sussex bay is not a suitable site.

Elsewhere – such as the Dorset Navitus Bay wind farm proposed in 2015 – the Planning Inspectorate has turned down applications due to visual impact on designated sites and potential harm to the local economy. The visual footprint of Navitus Bay was only slightly larger than that of the current Rampion 1 – with the latter itself deemed to be only just acceptable for visual impact on the SDNP when consented in July 2014. But Rampion 2 would be very much taller and larger and would span over 100 degrees of the horizon from several viewpoints. The harm of Rampion 2 would, therefore, be very much more significant than Rampion 1 and, like the Navitus Bay project, should be rejected.

There is a greener way forward. The Crown Estate has just announced (Round 4 Tender stage 2 ) a new tender opportunity for leasing other wind farms in the North Sea. There remains over 145 times the area that Rampion 2 would require – far more than enough to meet the entire UK 2050 net-zero target. And there is no visual harm.

This area is completely different from the Sussex Bay. Wind farms can be 100 miles offshore on Dogger Bank, for example, and in shallow water. They can connect to the new National Grid offshore network transmission that the government has confirmed in the December 2020 Energy White paper . This will provide a much more stable and secure link, obviate any extra direct connection to shore, will be more reliable and will not only power the UK but also allow us to export to the EU in times of strong winds when we have too much wind capacity – instead of paying the operators to switch off.

HAVE YOUR SAY and encourage Rampion’s developers to invest instead in an alternative project in the North Sea – or even in an extension to the Sofia wind farm that they are developing there. Write to your MP and other representatives – and be sure to use the very narrow Rampion ‘consultation’ [Rampion2.com ] to reject Rampion 2 very firmly. Suggest, for example, that the proposed area of search should be at least 25 miles from shore – and, for each of the other harms, point out that none would be necessary with a wind farm sited in the North Sea.

The Arun District Design Guide has been prepared as a Supplementary Planning Document to provide further guidance on design policies contained within Arun’s  Local Plan.  While the guide is a material consideration in Arun District Council’s decision making, the design solutions specified within are guidance only, and alternative approaches may be acceptable when sufficiently justified and after the local authority’s approval..  The level of information contained in planning applications should be relevant and proportionate to the nature of the development proposed, and master plans are encouraged to display appropriate innovation in relation to the context of the site

To review the Design Guide please use the link below

Any cookies that may not be particularly necessary for the website to function and is used specifically to collect user personal data via analytics, ads, other embedded contents are termed as non-necessary cookies. It is mandatory to procure user consent prior to running these cookies on your website.